What Everyone Should Know About Social Recruiting in 2014

What Everyone Should Know About Social Recruiting in 2014

Social recruiting was the buzzword for 2013; The year that recruiters worldwide began to truly discover the immense power of social networking and mobile technology for the first time. Everything from Facebook to Instagram, Twitter to Pinterest was poked with a stick to see what potential goodies would come falling out. As far as social networking goes there wasn’t a stone (or App) left unturned by recruiters keen to dig up yet another hidden source of “digital native” talent.

However, despite relative success none could topple the crown from LinkedIn; Reportedly the world’s largest professional network with over 259 million users, the site is largely considered the most fruitful platform for social recruiting. However, despite being the most widely used social network by recruiters, it isn’t the most popular site amongst social network users.

Take a look at this graph compiled by recruitment wiz Andy Headworth, who collected the figures from the top five most-used social networks at the start of the 2014: 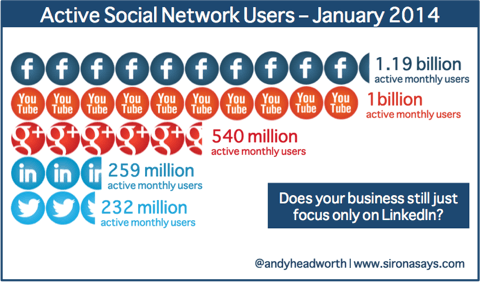 Facebook, YouTube and even relative newcomer G+ are blowing LinkedIn out of the water in terms of active monthly users. One seventh of the planet use Facebook! Headworth quite rightly begs the question “Does your business still just focus only on LinkedIn?”

2014 is the year that we need to step off the beaten path and explore further into the depths of social recruiting, even Twitter which comes in at number 5 boasts a cool 232 million users. Whilst LinkedIn rapidly becomes oversaturated with recruiters, the smarter cookies are pushing for more elsewhere.

Take Facebook Graphs for example, if you join the waiting list now you will be one of the first to make the most of their powerful new search tool which allows you trawl every single one of Facebook’s billion plus users for specific data, for example “software engineers in London” or “People who work for Google in California”. Watch this tutorial by recruiter Tony Stemen and prepare to be amazed:

Just to emphasize the newness of this unbelievable tool, this video (currently top of the list when you search for “Facebook Graph Tutorial” in Youtube) had a mere 297 views at the time of writing this article – we’re fully expecting that to explode any day.

Little known to many is that this incredible search facility is also available on Google+, it’s just sitting there waiting to be used! For those of you who haven’t begun sourcing via your Google+ account do it now, before everyone else jumps on the bandwagon (540 million users a month people!).

Having said that, you don’t even need to have a Google+ account to reap similar benefits, in this mind blowing tutorial from Recruitorial you can learn how to use a simple Google search to discover professionals worldwide on Google+, honestly once you watch it you going to wonder why you’re only just finding this out now.

A Word of Advice

Despite being great alternatives to LinkedIn it’s worth noting that Facebook, Twitter, Youtube and Google+ aren’t necessarily platforms in which people are generally anticipating to be approached by recruiters.

As Stemen points out in his tutorial, most Facebook users are there to connect with friends and family, therefore take caution when approaching potential candidates, remember that your operating on a social not professional network.

For an excellent article on approaching social recruiting etiquette take a look our guest post over on the Undercover Recruiter. >> Read the full article here

So stop focusing on LinkedIn and begin exploring the new and exciting ways to recruit via social networks, with new articles and tutorials popping up every online month (especially here so stay tuned) there’s no excuse not to stay ahead of the game. Have anything you’d like to add? At risk of sharing your trade secrets, feel free to post your tips on social recruiting below 😉